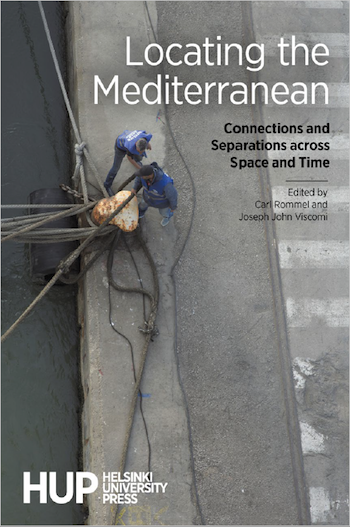 Connections and Separations across Space and Time

Until today, anthropological studies of locality have taken primary interest in local subjects leading local lives in local communities. Through a shift of conceptual emphasis from locality to location, the present volume departs from previous preoccupations with identity and belonging. Instead, Locating the Mediterranean brings together ethnographic examinations of processes that make locations and render them meaningful. In doing so, it stimulates debates on the interplay between location and region-making in history as well as anthropology.

The volume’s deeply empirical contributions illustrate how historical, material, legal, religious, economic, political, and social connections and separations shape the experience of being located in the geographical space commonly known as the Mediterranean region. Drawing from research in Melilla, Lampedusa, Istanbul, Nefpaktos/Lepanto, Tunisia, Beirut, Marseille, and elsewhere, the volume articulates location through the overlapping and incorporation of multiple social and historical processes.

Individual contributions are linked by the pursuit to rethink the conceptual frames deployed to study the Mediterranean region. Together, the volume’s chapters challenge strict geopolitical renderings of Europe, the Middle East, and North Africa and suggest how the ‘Mediterranean’ can function as a meaningful anthropological and historical category if the notion of ‘location’ is reinvigorated and conceptualised anew.

Carl Rommel is a researcher at the Department of Cultural Anthropology and Ethnology at Uppsala University. He is an anthropologist, whose research focuses on masculinity, sports, future-making and ‘projects’ in contemporary Egypt.

Joseph John Viscomi is a lecturer in European History in the Department of History, Classics and Archaeology at Birkbeck, University of London. He is a historian and anthropologist specialised in temporality, migration, and political processes in the Mediterranean region.

‘Locating the Mediterranean presents the fruit of a collective work that has for several years approached the Mediterranean and Mediterraneanism in a compelling, refreshing, and wonderfully productive new perspective. The introduction articulates and the chapters showcase the locating approach in varied, mutually complementary ways, which the epilogue gracefully brings together. This powerful analytic approach permits us to appreciate regional constellations and specific locations at the same time. That is so, as the authors explain, because these various locations are relative to each other (and to other cross-locations), and because they are all “partial locations”.’