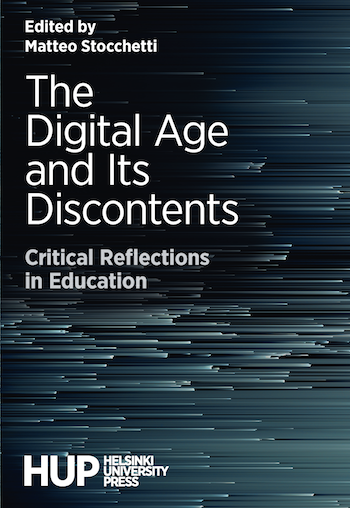 The Technological Imaginary in Education: Myth and Enlightenment in ‘Personalized Learning’

Chapter from the book: Stocchetti, M. 2020. The Digital Age and Its Discontents: Critical Reflections in Education.

This chapter examines what has been called ‘the technological imaginary’ as it exists specifically in education. It shows how primal and ideal scenarios, metaphors and images have been reproduced and repeated over centuries when it comes to education and its various technologies. It also illustrates how these images and scenarios can be said to have turned into ‘myths’—ultimately inseparable from utopian visions of a wholly enlightened world—and have regulated a great deal of activity in the area of educational innovation, giving it a kind of repetitive continuity that educational innovators generally see themselves as leaving behind. In particular, I focus on one prototypical image or scenario for learning that underlies many of the most ambitious visions in the educational, technological imaginary over the past 60 years or more: that of the one-to-one educational or tutorial dialogue between a wise or capable tutor on the one hand and an engaged child or learner on the other. In addition to showing how this image of dialogue has both enabled and constrained visions and possibilities for educational and technological innovation, I conclude by arguing that these visions are ultimately unrealizable—and that their realization would mean the end of education, rather than its utopian apotheosis.

This is an Open Access chapter distributed under the terms of the Creative Commons Attribution 4.0 license (unless stated otherwise), which permits unrestricted use, distribution and reproduction in any medium, provided the original work is properly cited. Copyright is retained by the author(s).